Are you thinking about buying or renting a property in Bristol's Harbourside?Located in the heart of the city, Harbourside is one of Bristol's most vibrant and desirable places to live. With its own festival during the summer months and a huge selection of bars and restaurants, the area has become popular with young professionals in search of water-side living and good access to the city centre.So, could Harbourside be the perfect place for you? Read on to find out more about living in the area.

Are there transport links nearby?

Harbourside's proximity to the city centre means that it is well served by local transport links. There are a number of buses that pass through the area, before heading on to central Bristol and Bristol Temple Meads station. There's also the ferry bus in the harbour, which takes you past historic attractions such as Brunel's SS Great Britain.

Harbourside is a great place to live if you're a fan of good food. Along the harbour itself, there are a number of bars and restaurants including The Slug and Lettuce, an elegant restaurant/bar, which serves food and cocktails. Other popular restaurants include The Stable, which offers an array of pizza and Tikka Flame, which serves Indian cuisine.

The harbour area is central to Bristol's night life scene and is usually buzzing on a Friday and Saturday evening. There are a number of well-known bars including a Pitcher and Piano and a Weatherspoon's, as well as some quirkier venues such as No.1 Harbourside.

Around 0.3 miles away, you'll find St Nicholas' Market, known for its food stalls that serve cuisine ranging from Portuguese to Moroccan. There's also the award winning Bristol Farmers Market, held weekly on Wednesdays, and the Friday Food Market on Wine Street, where you can get your hands on some of the best local produce Bristol has to offer. 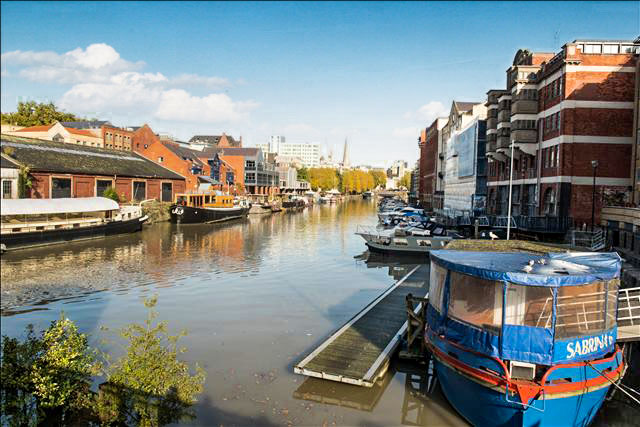 How does Harbourside rate for sports and leisure facilities?

For those who like to take their exercise regime outdoors, Bristol Rowing Club meet on the Harbourside and offer membership to over 18's on their Learn to Row courses. You can also try stand-up paddle boarding with SUP Bristol, who run taster sessions in the area.

On a sunny day, the harbour is a great place to take a stroll, with many of the bars and restaurants offering outdoor seating with water views. A number of boat tours also operate in the area, such as Bristol Ferry Boats.

Alternatively, there's Brunel's SS Great Britain, which was awarded three Michelin Stars in the 2012 Michelin Guide to Great Britain and offers tourists a fascinating glimpse of 1800's life on the high seas.

Bristol Aquarium is situated in Millennium Square and is home to over 4,000 aquatic creatures including sharks, stingrays and octopuses. The aquarium is open daily and there is an on-site café and gift shop.

Across the river at Spike Island, catch a glimpse of some of the latest and greatest artworks from Bristol's talented artistic community. The exhibition space holds regular talks, exhibitions and performances.

In Narrow Quay there's Arnolfini, which is one of Europe’s leading centres for the contemporary arts. The venue hosts a range of events including exhibitions, film screenings, talks, performances and family events.

If residents are in need of retail therapy, they can head to Cabot Circus in central Bristol, which is home to all of the high-street chains, as well as boutiques, restaurants and coffee shops.

For food shopping, there's a Tesco Express on Canon's Way, where you can pick up the essentials. In neighbouring Clifton, you'll find a Sainsbury's Local and a Waitrose on Queen's Road.

The Bristol Harbour Festival is held annually in Harbourside and hosts a superb array of food stalls from all over the world. There are also live performances on Queen Square, a fairground, boat show and fireworks above the harbour at night. As well as the Harbour Festival, there is an annual Thai Festival for Thai cuisine and a vegan food festival, Veg Fest, held in and around the Millennium Square area.

On Canon’s Road there's The Watershed, a cultural cinema, conference and events space, which holds regular events and also has its very own film club.

The area has access to a number of health centres including Hotwell's Surgery, whilst Bristol Royal Infirmary is around 0.8 miles away, on Upper Maudlin Street.

There are a few pay and display car parks in the area, including a multi-storey car park on Canons Way and a car park near Millennium Square for the @Bristol attraction.

Harbourside is within the catchment area for many local primary schools including Cathedral Primary School on College Square, which puts a special emphasis on music education and has collaborative ties with the Bristol Cathedral Choir. There is also a Church of England school, St Georges C of E Primary School on Brandon Hill.

Secondary schools include Ashton Park School in Bower Ashton, which has a specialist sports status. There's also St Mary Redcliffe and Temple School, which is a voluntary aided Church of England secondary and Cotham School, a specialist Co-operative Academy.

To find out more about buying or renting property in Bristol's Harbourside area, visit or call our expert team at the local branch.